Boil potatoes so they are cooked through. When they are done take cold water and run it over the bowl or pot so they will stop cooking. Throw them in the fridge and let them chill. You can do this step the day before you dress it if you would like.

Cut the red pepper in small chunks as well as the pickles. Reserve the juice. I use 2 red peppers and about 2 cups of pickles (spears cut in half, large dice) per 5lb bag of potatoes. You can use more or less if you want.

You can dress this salad the night before or right before you serve. Either way it is yummy!

Cube the cooked potato. You can peel or leave the skin on. Depends on your preference. In the bowl of potatoes pour in half the jar of reserved pickle juice (about 3/4 cup). This is the secret ingredient! Take your tub of Tofutti ® soy sour cream. Take about three large scoops (or 6 heaping Tbsp) and mix it in. Sometimes you will need more or less for a 5lb bag of potatoes. If you need more to get the texture to be a creamy potato salad add in more Tofutti ® sour cream. Add in salt, pepper, and garlic powder to taste.

I created this recipe about a year ago for a huge BBQ event we were throwing for over 150 friends and family. I needed more salads and really wanted to have a potato salad so I started to play around. I found the Tofutti ® soy sour cream added the right texture and didn’t deviate to much from the taste of most creamy potato salads I had made in the past. The pickles just added that extra punch it needed to really make it a good sell. Our friends and family loved it and there was barely any left despite the 40lbs of potatoes I made. It has now become a staple of our BBQs.

Milk and Soy Substitutions: Alternative dairy-free milk beverages and products will work in most recipes. Find out more about milk substitutions and soy substitutions. 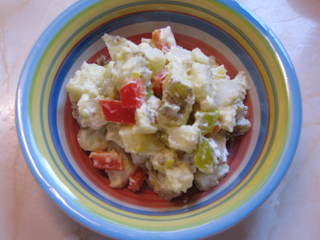