Marinate meat or zucchini. (There’s enough marinade to do EITHER zucchini OR meat for about 6. Or you could split the marinade and make zucchini AND meat for about 4.) Let meat / veggies marinate for 3-4 hours or longer.

I like grilling in the summer, mostly because it’s the only way I can get my husband to cook. This was a treat – it never occurred to me to con him into making the vegetables in addition to the meat!

My allergic child didn’t care for this (go figure), but everyone else did! 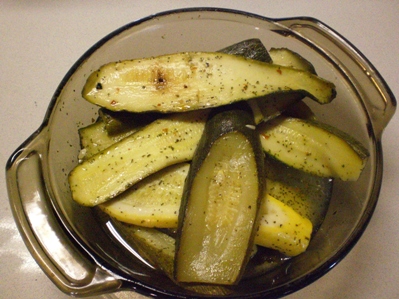