Recipe Created By: Lacy of Making it Milk Free

Place the can of an ice cream machine in the freezer to chill. In a medium saucepan, whisk together the brown sugar, cinnamon and salt. Place pan over medium heat and gradually pour in the creamer and vanilla. Allow the mixture to heat up until the brown sugar is dissolved, but do not allow it to boil. Once the sugar is dissolved, remove from heat and allow the mixture to cool. Pour into a bowl and place the mixture in the refrigerator to chill. (You could also chill the mixture faster in the freezer, but not long enough to harden.)

Pour apple cider into a small pan with a lid and place over high heat. Once it begins to boil, lower the temperature to medium and remove the lid. Allow to cook at a steady boil until the cider reduces and begins to caramelize. Mine took almost exactly one hour to reduce. Pour into a small bowl and place in the refrigerator. As it cools, the consistency will become a thick syrup.

While the cider is reducing, melt the coconut oil in a small saute pan over medium heat. Add the diced apples and cinnamon. Reduce heat to low and saute the apples until they become soft. Pour apples into another small bowl and refrigerate.

Remove the can of the ice cream machine from the freezer and pour the chilled ice cream base into it. Place the can in the ice cream machine and begin mixing according to manufacturer instructions. You’ll want to add the apples near the end of the mixing time, which for me took 30 minutes. When ice cream reaches a soft serve consistency, add the diced apple chunks and continue mixing for about 5 minutes. (Note: if you try adding the apple cider syrup at this point, it will just mix into the base and won’t swirl. The flavor would still be delicious, but I like the swirl effect.)

This recipe is shared courtesy of So Delicious Dairy Free.

Coconut: Although classified by the FDA as a tree nut, coconut is not a common allergen and is not related to tree nuts. If you have a tree nut allergy, consult your physician to find out if you need to avoid coconut.
Milk and Soy Substitutions: Alternative dairy-free milk beverages and products will work in most recipes. Find out more about milk substitutions and soy substitutions. 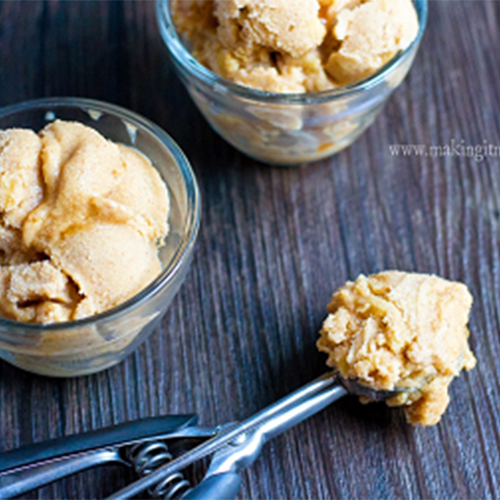