Saute scallion in 1 Tablespoon oil in a small saucepan over medium heat until soft and translucent, about 5 minutes. Add garlic and cook one minute more. Remove from heat and set aside to cool to room temperature.

Heat one inch vegetable oil in a heavy skillet to 375 °F.

For each wrapper, place one teaspoon of avocado mixture in center of won ton wrapper. Moisten the outside edges of the wrapper by dipping your finger in water and running it around the edge. Fold wrapper in half to form a triangle by bringing two opposite points together. Crimp edges securely by pinching firmly with fingers to seal all edges.

Deep fry, two or three at a time, until golden brown, turning once. Cook approximately one minute on each side. Drain on paper towels.

These were inspired by the Avocado Egg Rolls at The Cheesecake Factory. I don’t know how close I got, but even my picky DH liked them.

Scallion may be substituted with 1/4 of a red or purple onion.

Won Ton wrappers may be substituted with UNCOOKED flour tortillas for an egg-free option. I made them this way successfully, by cutting the tortillas into quarters with a pizza cutter, and crimping the edges the same as the Won Ton wrappers. These are available in the refrigerator section of Costco in Southern California. I don’t know about the availability in other areas. 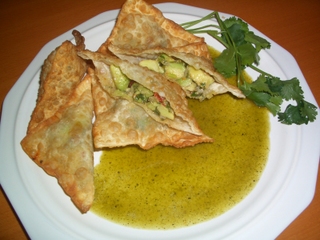